At Phone Bill Casino we appreciate that to some players the choice of slots available are an important factor when selecting a new casino, so as well as casino reviews we also like to give you an insight in to the latest and most popular slots available, which is why below you will find some very helpful information in our Hellboy Slots Review.

Hellboy slots is the latest in a long line of comic book heroes to leap from the page to the big screen and eventually make their way to the casino floor, but whilst some haven’t enjoyed a successful transition, Hellboy Slots has lived up to hype and were sure you’ll find it very enjoyable in deed. 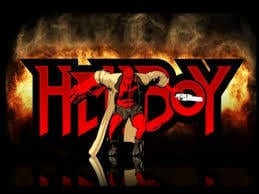 Where to Play Hellboy Slots;

Anung Un Rama is the demon that’s otherwise and more commonly known as Hellboy, as an infant Hellboy was summoned from the depths of Hell by Nazi Occultist who hoped they could harness his power to further their cause, unfortunately for them he was eventually discovered by the Allied Forces, who take him under their wing and utilise his unique skills in the age old fight of good versus evil.

Microgaming were given the task of bringing this big screed spectacular to you in the guise of a desktop and Hellboy mobile slot, a task they have managed impeccably by capturing all the aspects of the movie that made it so popular with comic book enthusiasts.

Hellboy Slot follows the popular tried and tested format of a typical 5-reel 20-payline slot machine, as experts in the gaming industry Microgaming have replicated the movie style graphics and paired it with a soundtrack full of suspense, the in play animations and gaming features then put the cherry on top of this very thrilling cake. 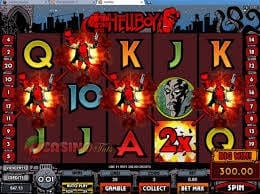 As you begin to play Hellboy Slots and spin those reels, you’ll begin to notice that all of the main characters from the comic and film are featured throughout, alongside the usual high card symbols.

I’m sure you have probably guessed that our demonic super hero is the symbol used to indicate the wild, meaning that he can act as any other symbol in the game to complete your winning line, not happy with being just a wild, the Hellboy symbol also has the ability to double all pay-outs.

It just wouldn’t be a Hellboy Slot if it didn’t feature his iconic stone fist, the fist is used as the scatter symbol, which is quite fitting considering the power it can enforce, when it appears on screen the scatter symbol indicates a pay out without the need for matching symbols, but if you match 3-5 fists you will unlock the special underworld bonus feature, which gives out bonus rewards as Hellboy powers his way through tunnels destroying various creatures.

Hellboy Slots also feature an impressive and rewarding Supermode, which is triggered completely at random to award you 10 bonus spins, these spins have a twist though as Hellboy helps improve your winnings by converting 3 symbols to static wilds that for every spin.

With every win there is another opportunity to increase your winnings with the use of a deck of cards, correctly guess the colour of the next card to be drawn from a deck and you will double your winnings, or guess the suit correctly and you can quadruple them.

Hellboy Slots is an exciting and fun pack casino slot and if you’re a fan of the comic book genre then this will definitely sit well with you, but even if you’re not we highly recommend you give it a try.